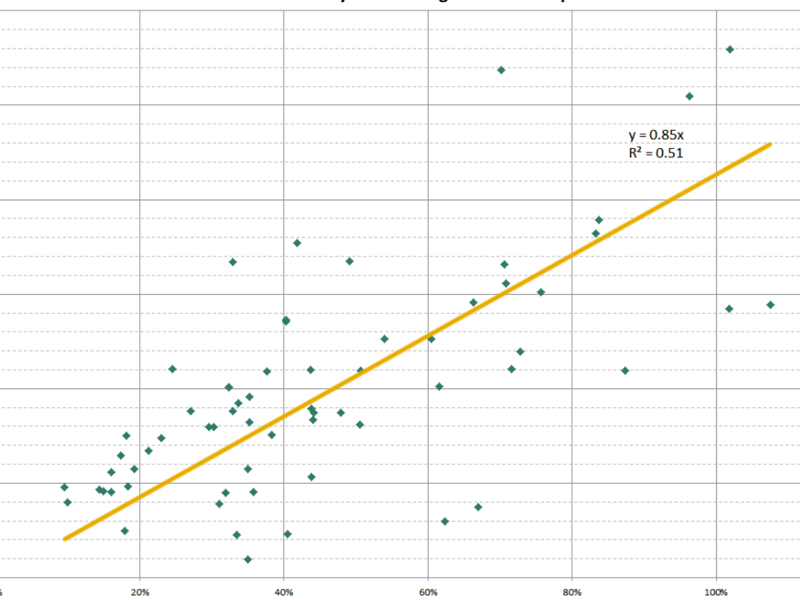 Author:
Dale Chang
Metrics
Share Now
There is way more to growth -- and managing for growth -- than growth rate. Here are three approaches to keep in mind.

There is way more to growth -- and managing for growth -- than growth rate. Yes, your company’s growth rate matters in the process of securing top-tier venture investors. But the analysis that those investors perform on your data room goes much deeper than simply cross-checking how fast your ARR has grown and projecting the rate it will grow in the future.

This article covers three methods that the Scale investing team uses to evaluate a startup’s growth. As we’ve done throughout our Vital Signs series this year (covering sales efficiency, cash burn, customer retention, and now growth), we’ll start with an advanced primer then go deeper into the topic in the articles that follow. Stay tuned.

The article introduced Scale’s “instantaneous compound annual growth rate” or iCAGR. The name might be a little unwieldy but it’s value is pretty straightforward: it is a calculation that we use to understand how fast a company is growing right now. Why that’s useful takes some explaining.

The most common measure of growth is the quarter-over-quarter / year-over-year growth rate. It’s the rate most everyone in SaaS is using when they say “We expect to grow 150% this year.” The formula is the same whether you’re talking ARR or GAAP revenue:

So what’s the problem? There’s not a problem, but there is a subtle shortcoming: the year-over-year growth rate can mask a recent slowdown in growth. Here’s how. Follow the ARR Growth Rate line in the following table of a hypothetical early-stage hypergrowth startup.

Now look at what’s going on with Net New ARR: it’s rapidly slowing on a sequential basis. There can be perfectly understandable reasons for why, but we would see that as a red flag. The point is that year over year growth looks strong despite slowing in Net New ARR, a key leading indicator of future growth.

That’s where iCAGR comes in. By tweaking the standard compound annual growth rate formula, iCAGR tells us more about recent changes in growth. The formula looks like this:

We’ve learned that iCAGR is best used alongside other metrics (it is a weather vane, not the weather) and that a “good” iCAGR varies considerably by revenue level (it’s best used to compare companies at similar stages of growth). You’ll see iCAGR front and center on our Scale Studio Reference Benchmarks page.

Definitely spend some time with the original article for the full analysis and commentary. It’s a great primer on a super useful SaaS growth metric.

Way back in 2012, Andy Vitus led an effort to answer a tricky question. The question arises at every company at the end of every year, as the annual planning process kicks off: How fast can, or should, we grow? It’s tricky because “can” and “should” will often have two very different answers.

“How fast can we grow?” can be calculated because, at any given point in time, a company’s resources (people, processes, capital) will determine a theoretical maximum to how much revenue can be generated next year. And thus next year’s growth rate. Think of the jet engines hanging from a plane’s wings: they can power the airplane up to a certain speed and no faster.

“How fast should we grow?” is a more complicated question. First, it can’t be answered without a defined goal. Is your company racing to cash flow breakeven as quickly as possible to reduce reliance on outside capital? Are you maximizing growth to keep your company on the shortest possible path to IPO? Or something in between?

The best answer to these questions is often “it depends”. But we wanted to give our portfolio companies better advice than “it depends” and landed on the idea of “growth persistence”. We won’t repeat the original growth decay article, but take the time to read it. As we’ll see in a second, it remains incredibly useful and accurate even eight years later.

The first big takeaway is this:

That right there is a powerful reality check on your annual planning assumptions. If your ARR falls into the $1M to $1B range, and you expect to match or exceed your current year growth rate next year -- stop immediately and dig deep into your assumptions. Growth acceleration at scale is pretty rare.

To see just how rare, here’s the original data set. The points far above the trendline represent companies that greatly accelerate year over year growth. There aren’t that many. 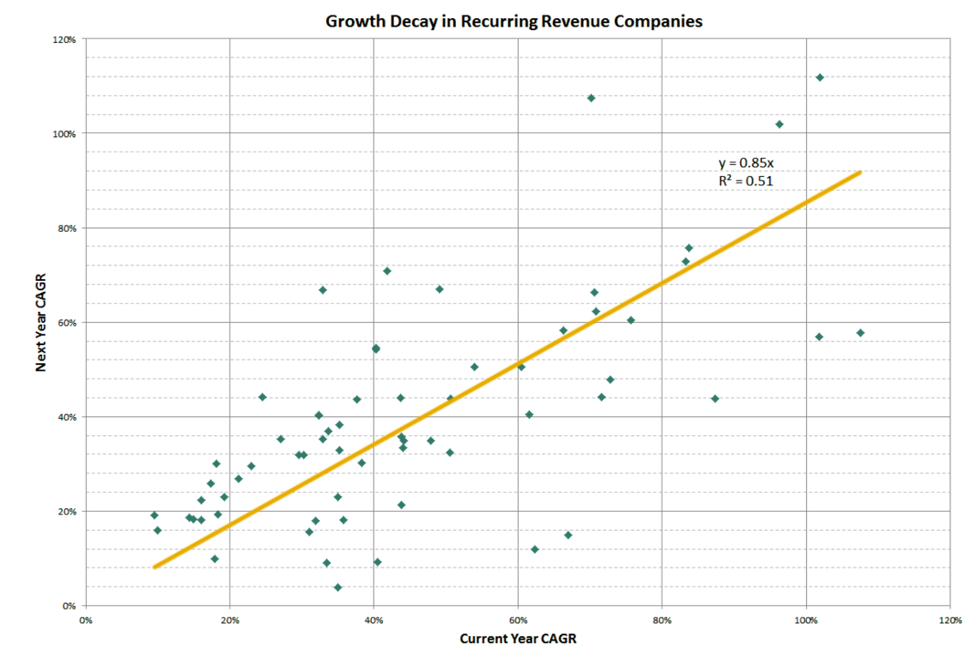 (Important note: the analysis omitted companies in the very early, very high growth rate category. Out of the gate, early-stage startups can and should have accelerating growth rates. But even at 120% year-on-year growth, growth persistence is at work.)

In case you’re wondering whether that 85% figure has held up: it has. We recently re-ran the analysis on the public SaaS companies.

* Note that this data derives from a smaller set of companies than the original analysis. We ran this analysis on the readily available public SaaS comps to verify that the original 85% holds true.

We see that annual growth persistence rates jump around but cluster around the original 85% figure. As a rule of thumb, then, 85% holds up -- keep it in mind every year during annual planning.

The bottom-line takeaway: Increasing next year’s growth rate is exceptionally difficult for recurring revenue businesses that have scaled beyond the early hyper-growth period. Even maintaining growth takes flawless execution.

“How fast do I need to be growing to be interesting to a venture investor?”

Here is another question that often gets answered with an “it depends” or a rule of thumb like the Triple-Triple-Double-Double. Not satisfied with either answer, Rory O’Driscoll developed a model called the Mendoza Line to define the minimum growth rate at any revenue level necessary to be on track for an eventual IPO (and see the original article for background on the baseball reference).

We defined “IPO ready” as follows:

Looking at the realistic low bar of what it takes to be a public company, this implies being at run-rate ARR of $100MM at the time of IPO with a forward (next year) growth rate of 25%+.

Factoring in the reality of growth persistence, we derived the line that defines IPO viability at any point in time.

The original Mendoza Line of SaaS article does a great job of explaining the model’s strengths and shortcomings. Just know that your company’s early growth rates are critically important because of the compounding effect of growth. The higher above the Mendoza Line early on, the better positioned you are to weather the persistent decay in forward growth as your company scales revenue.

Finally, keep in mind that “growth” isn’t some feature of your company that can be modified at will. Your growth rate can be thought of as a score that tells a comprehensive story of how well your company is performing. Improvements to business processes, go-to-market strategies, or enterprise sales outcomes can contribute to improved growth rates. As we stated in the original Mendoza analysis, “diagnosis isn’t death”. There are countless examples of companies that retool and re-accelerate growth.

Your current growth rate, times an estimate of growth persistence, is your most likely future. To change that future and raise that trajectory requires an act of will to overcome the inertia that all businesses face. It may mean new executives, new products, or changing business models.

On the Up and Up

We hope this overview of growth metrics and concepts has been helpful. The next part in this series will look at benchmarks on growth rates at various revenue levels. We’ll zero in on the rate of change of the rate of change -- math geeks prepare yourselves!