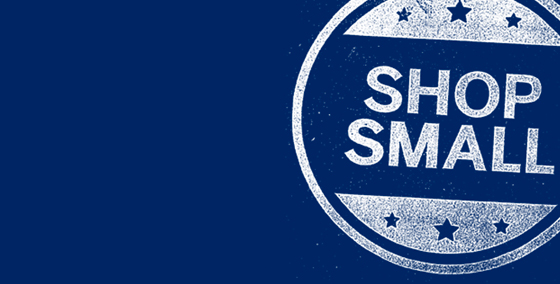 Should Your SaaS Company Sell To SMB?

By Alex Niehenke
Scaling
Share Now
Software as a Service has changed the way software is consumed. It is also changing the go-to-market for new software companies

Traditional client-server software favors large enterprises. Licenses required big, upfront cash commitments and customers need in-house IT for implementation, maintenance, and security. Small and medium sized businesses (SMBs) generally do not have these resources, and even if they do, are reluctant to make the large investments needed. SaaS has changed the paradigm by pushing IT requirements to the cloud into a shared resource. More important, it's turned the purchasing decision into a monthly operational expense that can easily be scaled up or down as the business needs change. Many SMBs are now buyers of software that was previously not accessible to them.

Young software start-ups no longer need to invest millions to build out an enterprise-grade product. Rather, they can quickly enter a market with limited features and functionality by focusing on the SMB buyer. This buyer has lower requirements and a higher propensity to adopt new technology. We're seeing new SaaS start-ups getting into the market with minimum viable products faster than ever before. These companies then iterate their product based on customer feedback and demand. The most frugal even charge customers for product build-out, self-financing the company's road map through customer cash.

With time a SaaS company's product becomes more robust. The company innovates its product in areas where traditional vendors are lacking. Mid-market and enterprise customers start calling. Larger companies become customers and account sizes grow. The natural march up-market begins. We've seen the process repeated many times in our portfolio with HubSpot, RingCentral, DocuSign and Box as recent examples. This attack from the bottom is also known as the Innovator's Dilemma. However, it's particularly acute in the software business where a SaaS vendor can ultimately serve the full market from SMB to large enterprise all with the same software platform modulated for customer size. 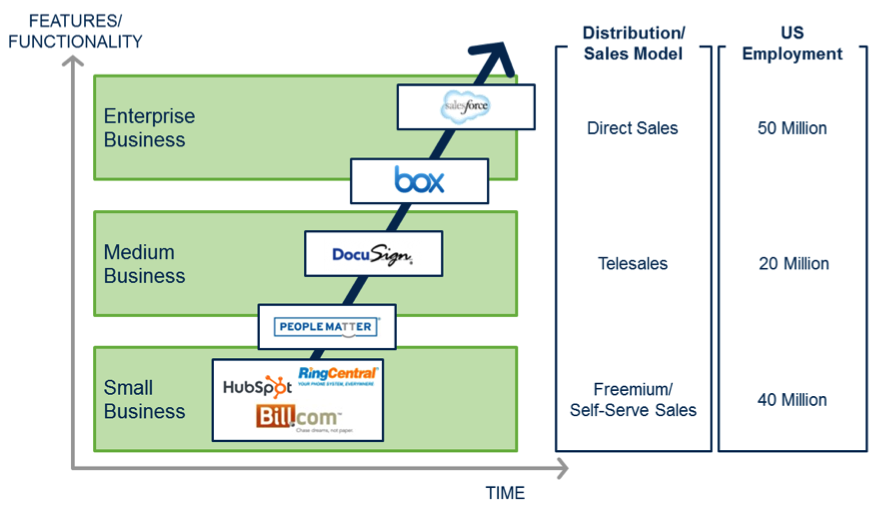 The most direct measure for a company's trajectory upmarket is growth in average selling price (ASP) per customer. Salesforce (CRM) and NetSuite (N) are successful companies that embody this tendency. Both started their businesses in the SMB market. Looking back at their initial public filings, NetSuite disclosed (December, 2007) that its "customers are small and medium-sized businesses and divisions of large companies" while Salesforce similarly stated (June, 2004) that they "derive a significant portion of [their] revenue from small businesses".

The numbers shed even more light (neither company discloses ASP per customer, but both do report customer count that can be divided into the last quarter's revenue and multiplied by four to approximate ASP). Industry reports estimate that NetSuite's ASP was as low as $120 in 2001. By the time NetSuite went public in 2007 average ASP had grown to $20K, up from $15K the previous year. In 2010 NetSuite publicly stated that it wouldn't onboard new SMB customers and today ASP is $45K with most new customers coming in at over $100K. It's come a long way from its early days of its customers being small and medium-sized businesses. Similarly, Salesforce had an ASP of $14K when it went public in 2004 and has grown its ASP over 40% since IPO. We've heard that Salesforce's ASP was in the low thousands in the early days. 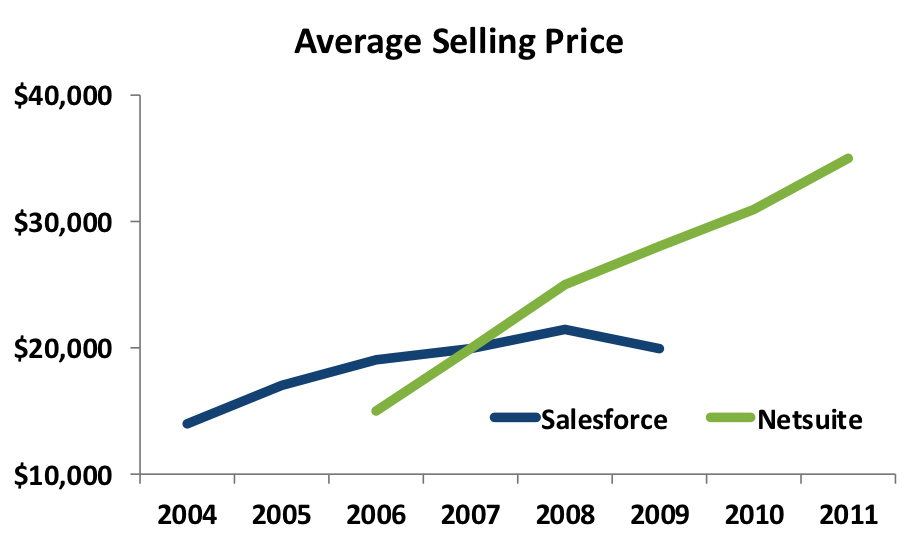 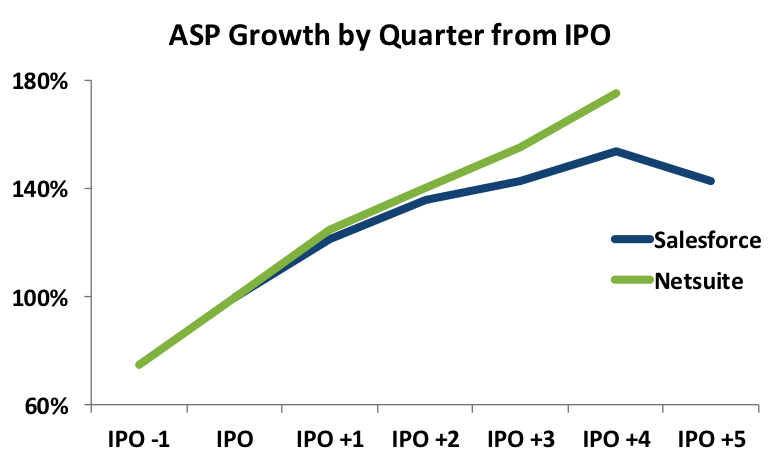 Of course some software products can only be launched into the enterprise. Companies like Workday and Cornerstone OnDemand come to mind but most young SaaS companies should heavily consider the SMB market in their initial go-to-market strategy. SaaS companies can get to market quickly and iterate based on consumer feedback. Larger accounts and growth in average ACV will come with time. We believe you can scale massive businesses by starting in the SMB segment and we actively invest in companies focusing on this market.

In our next entry we'll discuss best practices for when and how to scale upmarket.