The Difference a Year Can Make…

By Kate Mitchell
Trends
Share Now
Sometimes a year flies by almost without notice….not this year having worked on the JOBS Act passed today in Congress…

Sometimes a year flies by almost without notice….that hasn't been the case for me. Over the last 12 months, I have had the opportunity to tackle the problems in the IPO markets alongside passionate entrepreneurs, learn from peers throughout the ecosystem about the workings of the securities markets, and see a result that I couldn't have imagined in my wildest dreams - a bi-partisan bill, called the JOBS Act, passed today in Congress and now headed for the President's desk for signature.

A year ago on March 23rd, the Treasury Department held a conference called the "Access to Capital for Small Companies". On the topic of access to public capital, my panel identified the decline in IPOs as a long term issue for the US economy. Anyone familiar with the data knows that IPOs have been dropping steadily since the late 1990's. Why should we or anyone in Washington care? Because emerging growth companies create jobs. A report by IHS Global Insight shows that 92% of a company's growth occurs post IPO. The proceeds for an initial public offering are used to fuel continued growth as a number of CEOs noted in an August survey, and yet an IPO is difficult to achieve.

Since there is no single regulatory culprit that created the problem, my recommendation last March was for a diverse group to work together to develop solutions that were pragmatic but meaningful - and with that, the IPO Task Force was born. We included CEOs, public and private investors, former regulators and accountants. Each of us had to leave our preconceived notions at the door. Any solution had to work for the whole ecosystem and particularly for those who make the market - the institutional buyers of IPO stocks. The goal was to increase the rewards that come from more job-creating IPOs without taking on undue risk in the markets as Bob Samuelson eloquently points out in his recent article.

The resulting work - called Rebuilding the IPO On-Ramp calls for changes that were meaningful but tailored. It provides a short term "on ramp" to the full regulatory scheme that the very largest companies must comply with. It phases in a small number of expensive regulations that were acceptable to the buyers of IPO stocks. Emerging growth companies still have to comply with most regulations right away, but should expect to see a 30-50% drop in the $2.5M average cost of an IPO.

We also tackled the problem of modernizing investor communications. The securities regulations designed in the 1930s focused on investor transparency, but had been amended over time in response to various abuses, with the unintended result of making IPOs incredibly opaque - not a good outcome for the buyer or the seller of these securities. With the goal of making tailored recommendations, however, we carefully left all the core investor safeguards in place like the Global Settlement, Reg AC and the FINRA codes of conduct.

The result is a something that makes it more feasible for entrepreneurs to build a company and take it public as Jon Callaghan points out. At the same time, it allows public investors to achieve the investment returns they earned when companies such as Apple, Cisco and Intel went public as Josh Kopelman discusses.

The best thing about this past year, however, has been the chance to return something to the entrepreneurs who work so hard to drive the innovation engine we all benefit from. At Scale Venture Partners, we believe that the best thing about our job is to be able to work with smart, passionate entrepreneurs, who are willing to take the risks to potentially build something big. The comments from entrepreneurs have been overwhelmingly supportive, like what we heard from Brian Gentile, the CEO of Jaspersoft.

As I have told people I've met with in Washington during the last year, it isn't only the pre-IPO companies who are encouraged by the JOBS Act. Since it includes a set of changes that improve the access to capital throughout a start-up's life, it is promising to even the earliest-stage entrepreneurs as you can see by the >5,000 entrepreneurs who signed the Angel List petition a week ago.

Will there be a tripling of IPOs next year? No, and that is probably a good thing. Will it mean that more entrepreneurs with good ideas decide to go for it, and try to build the next Google or Starbucks? You bet… and that is a good use of a year.

Kate with Scott Dorsey, CEO of ExactTarget and Josh James, former CEO of Omniture at the White House for the signing of the JOBS Act bill plus subsequent WSJ coverage on Kate's efforts on the JOBS Act. 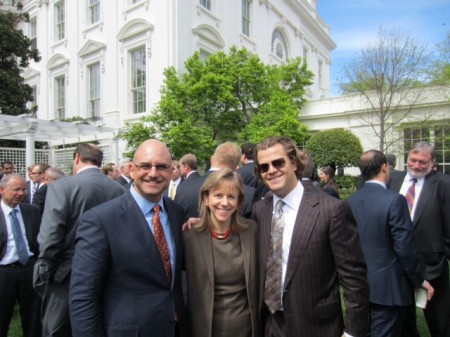 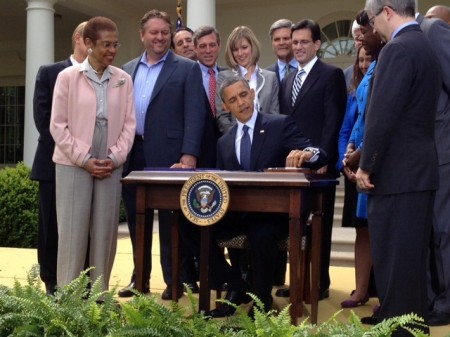