The Current State of SaaS

Scale has been investing in SaaS since 1999 with over 40 SaaS investments including four billion+ dollar IPOs (Omniture, RingCentral, Hubspot, and Box). The industry is now over fifteen years old having morphed out of Application Service Providers in the late 90s. Not since the move from mainframe to client-server has anything had such an impact on the software industry and it continues to rise. While we have evolved beyond SaaS infancy, we are now seeing the vast rewards in the amount of wealth these companies are creating in the public markets. Below outlines the Scale SaaS Index comprised of public SaaS companies we use to benchmark the industry. 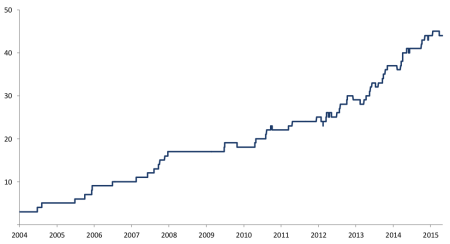 Digging through the data, other stats we uncovered:

For criteria, we focus on those that use SaaS as a business model, ignoring candidates that derive the majority of their revenue from non-recurring revenue, on premise installations, or professional services. The companies in the index are:

Companies that were in the index historically and have since gotten acquired are:

In the coming months we will be releasing a string of content on SaaS metrics based on our portfolio companies and public comparables. Bookmark this page and come back from time to time. We ll update this list as new listings occur or listed companies get acquired.