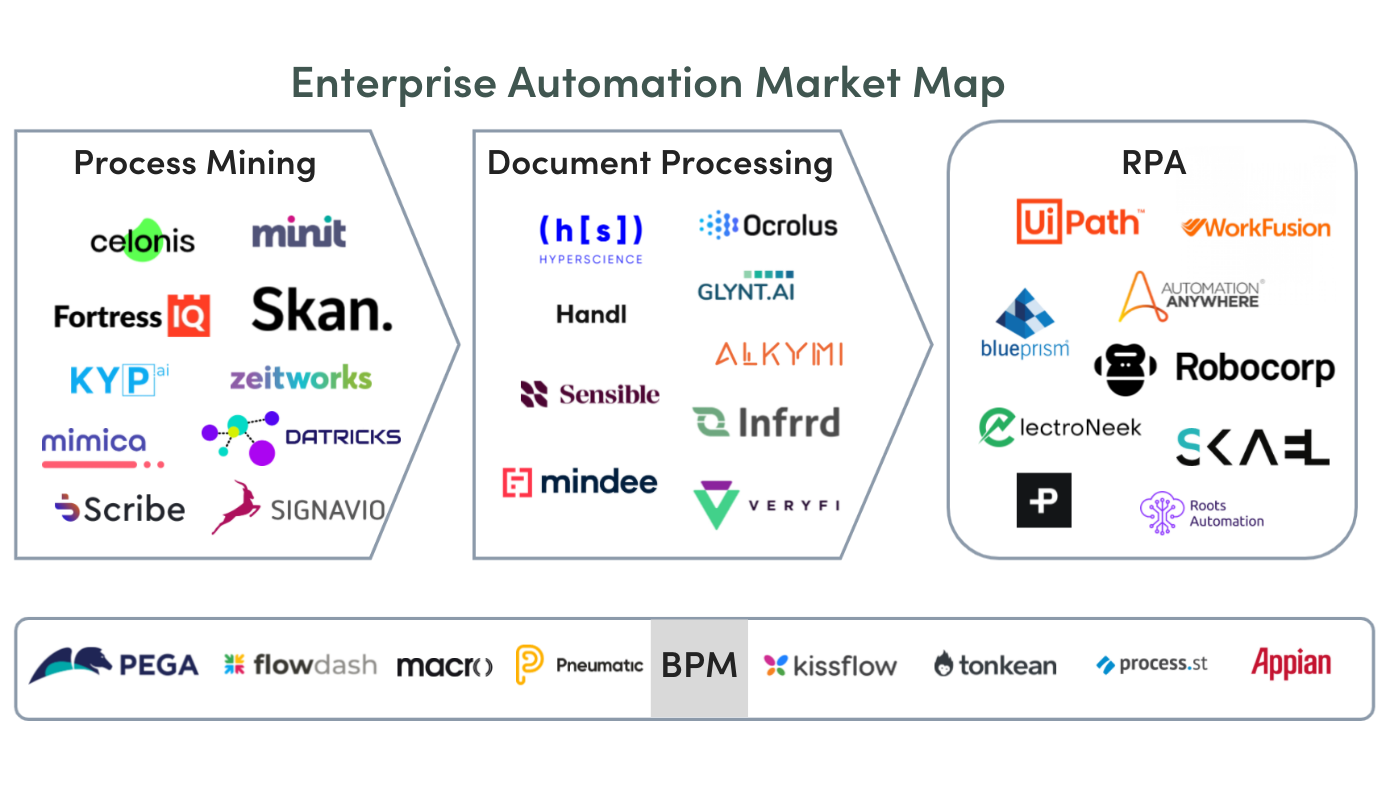 By Chris Yin
Trends
Share Now
Scale’s Chris Yin on the past, present, and future of enterprise automation technologies including a market map of startups developing next-gen end-to-end and predictive solutions.

On the heels of UiPath’s announcement of their upcoming IPO, I wanted to highlight how we are thinking about enterprise automation at large and where it’s going. One of the distinctive features of this area is that while most software products assist people in doing the work, these automation products actually do the work for you.

Looking at the development of enterprise automation in this light explains a lot about how the market got started (task automation), where it’s at today (end-to-end automation), and where it will go over the next decade and beyond (predictive automation).

We’ve spent a lot of time here as a firm because automation is a big complicated topic. We’ve had dozens of conversations with vendors and customers, and wanted to share some of what we’ve learned.

Companies have always wanted to find smarter and faster ways to do their work. The first versions of “automation” were just simply outsourcing work to BPOs. BPM companies like Pega and Appian then came onto the scene to help standardize and structure those workflows into software. In the last two decades, those products moved to the cloud and, in recent years, RPA has really come to the forefront.

Over the past few years, the term automation has often been used interchangeably with RPA. While it’s a big part of what is going on, it’s only a part of the story. Several other interconnected categories (IDP, BPM, PM, etc.) play important roles here as we move beyond the first phase of automation. But let’s start with an outline of the overall waves of automation that we’re seeing:

Taking stock of where we are today, it feels like we are squarely past the task automation phase and now deep in end-to-end automation. The combination of tech, customer, and market maturity is giving the end-to-end phase the necessary tailwinds and explains a lot of the current activity here.

It also seems like the tech and customer capabilities are not quite yet ready to support predictive automation. Given it took us nearly a decade to transition from task automation to end-to-end automation, we still have some time to go before we move on to predictive automation. Getting there will take a step change in the ability to build products that can systematically discover the right processes, easily design the right bots, and then run them effectively.

So we’re in the throes of end-to-end automation. The big picture story is that we are evolving from smaller, simpler automations to longer, more complex ones. This is pushing incumbents to expand their product suites to compete in this world and also bringing new startups into the market from different angles. For example, process mining is getting a lot of attention right now as it’s a necessary component of end-to-end automation – having an accurate map of your current processes is a critical part of building these longer workflows. So lots of new process mining startups and incumbents are acquiring or adding these products to their suites. But there’s a lot of noise and figuring out which approaches will ultimately work is hard.

Some observations about what’s happening:

There are clear winners in the first wave of automation but the second wave of end-to-end automation is still up for grabs. The winners of end-to-end will be well-positioned to lead the charge into enterprise automations’ predictive future.

Up to this point, we’ve looked at enterprise automation from 50,000 feet. But there’s a lot going on at the startup level, with some really interesting new products tackling process mining and document processing as well as more established categories like RPA and BPM.

The endpoint of true end-to-end process automation is still a ways out. But we can see an outline of how the overall market will evolve simply because end-to-end automation by definition requires a lot of different systems to work together really well. Those functional pillars are how we’re laying out our (work in progress) market map: 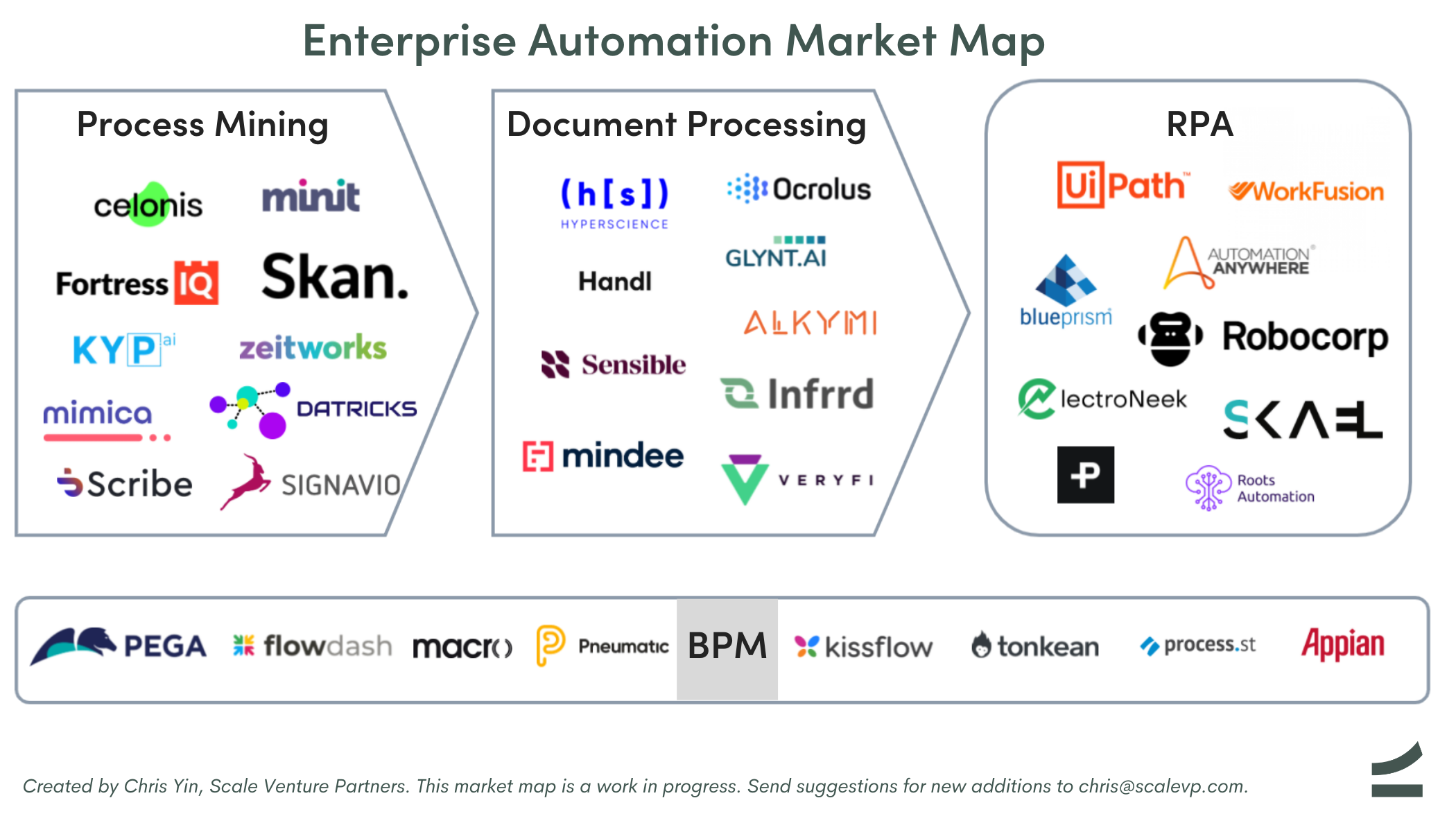 Broadly speaking, being able to reliably and flexibly automate a process from start to finish takes several things:

The exciting thing here is how incredibly useful and valuable all of these products are to their customers. They help automate away rote work, standardize workflows for more efficiency, and help elevate the plane that we all work in. Each area is taking their own approach to solving this problem but one thing is clear: the ambition for everyone is to build a full automation platform and own the whole thing. We’re super excited with all of the innovation in this market and please do reach out if you’re working on anything here!

Our enterprise automation market map is a work in progress. Send suggestions or additions to chris@scalevp.com.