There are two miracles in startups: companies invent wholly new things the world decides it wants, which makes the companies grow. And the companies themselves survive their extraordinary growth. A company experiencing explosive growth can expect both revenue and headcount ramping at 100% plus per year. Being in that environment, and managing it, is both a blast and an incredible stress.

Before I joined ScaleVP, I worked in a startup with a revenue trajectory that went $1M-$16M-$140M in 1998-1999-2000. We were always bursting at the seams, and often it felt like our rocket ship was about to explode as we tested all the boundaries of recruiting, hiring, training and managing. Now, as a board member, helping a company think through scaling talent, whether recruiting new executives or articulating goals, is critical to both the company and ScaleVP realizing the promise of our mutual investment.

So what does explosive growth from a talent perspective look like?

Here's the headcount growth over three years for six classic "scaling" companies, startups that we backed when they were early in revenue and beginning to ramp. 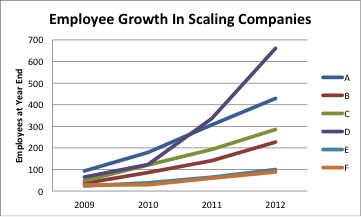 These companies together added 1500 net employees in three years, an average employment growth rate of 84% per year. Assuming 20% of net additions churned (I don't have the data on this but hope to explore it later), these six companies recruited and on-boarded 1800 new employees. If you add just two of ScaleVP's later stage companies, another 1000 net new jobs were created and filled in the same time frame.

Where does this growth happen in companies? Across the board. There is not just a single function the company can focus on when growing. Here's an example, this company grew from 15 employees in early 2009 to 107 at the start of 2013. Even though we often focus on "scaling" sales and marketing, most of the departments grow rapidly, especially in that early scaling phase. As companies approach later stage and their steady state operating margins, "scale economies" kick in, and G&A and R&D become more like fixed expenses, while sales & marketing grow. 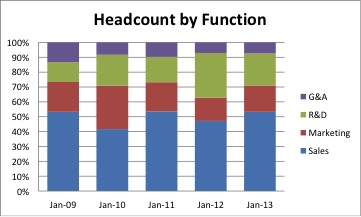 So, just as sales management must "ABC" Always Be Closing (NSFW classic movie), founders, executives and managers in startups must ABH: Always Be Hiring. CEOs must be magnets for talent, attracting top executives who share the vision and will do the early work hands on. This doesn't mean CEOs pass out offer letters like Halloween candy. Leaders must be looking at the horizon, understanding talent needs to come and who is best and most likely to fill those needs. Strong leaders cultivate relationships with people whose skills lie in the company's next new need, whether strengthening security, expanding sales channels or professionalizing HR.  As companies grow, management fans out at middle layers, and the hunt for talent percolates down as well as across the organization. Be sure that you, and the leaders you bring in, continually attract the best.

From $0 to $1M: Extending Your Hyper-Growth Period

From $0 to $1M: Compounding Growth