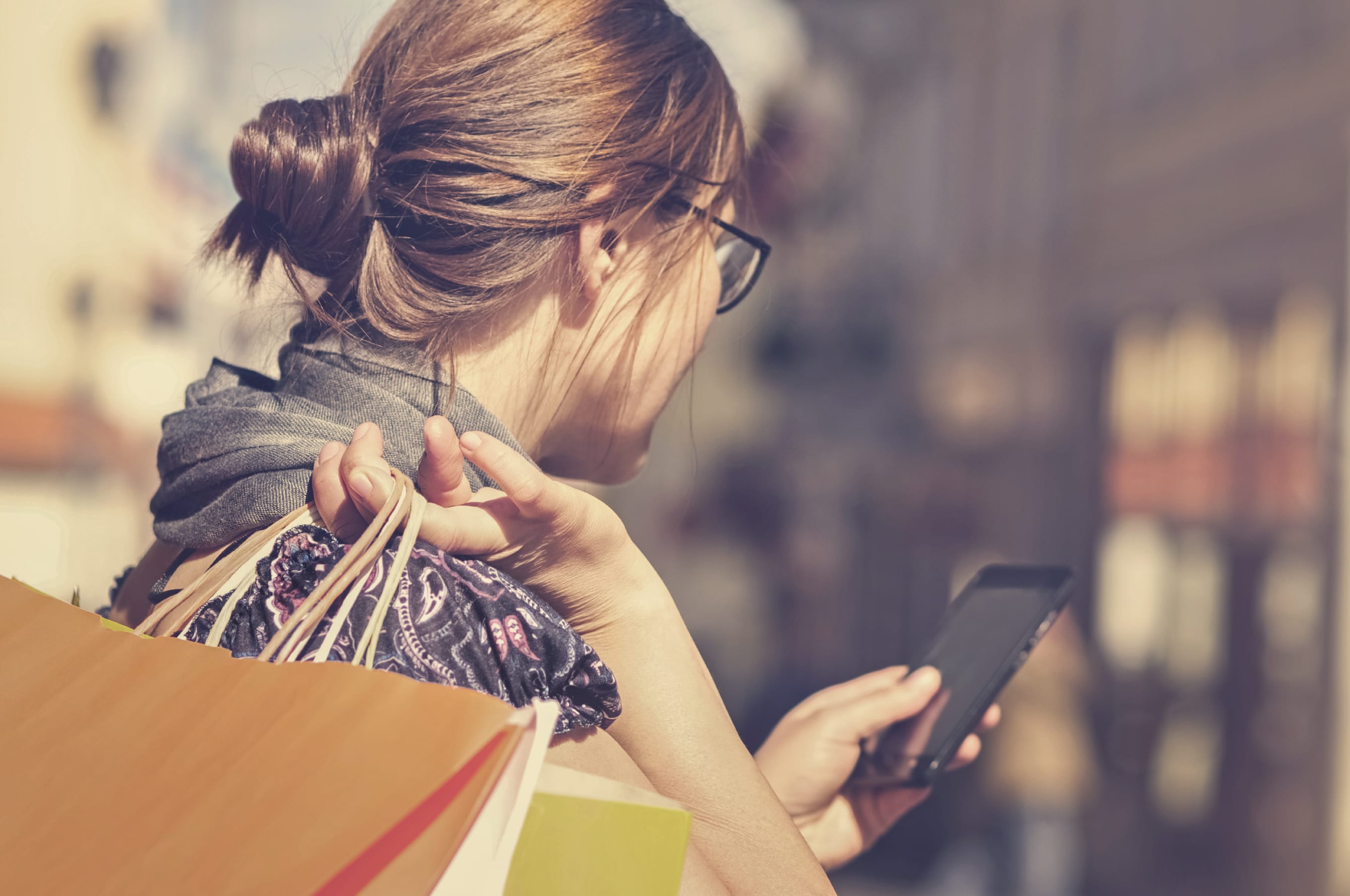 US ecommerce sales exceeded $300B in 2015 and are estimated to continue to grow 15% annually, leading to the industry doubling again in the next five years. Within eCommerce, Amazon stands above the rest. One in every five dollars spent on ecommerce in North America goes to Amazon, $64B in the most recent year. Those two statistics are astounding: 1) a $300B industry that's quickly doubling, and 2) a market leader owning +20% market share of this industry.

Amazon is the leader in ecommerce because of innovation targeted at the consumer. It has conditioned consumers to expect blazing page load times, plethora of product reviews, relevant product recommendations, guaranteed two-day shipping, single-click check-out, wish lists, and dozens of other features. In order to provide all these services Amazon has built out one of the world's largest computer infrastructures (AWS) and now enjoys transaction volume that is only matched by Walmart. Unmatched by any other commerce company, Amazon employs roughly 27,000 software engineers according to LinkedIn who are continually upgrading and innovating its proprietary ecommerce stack.

Amazon’s innovation in ecommerce has raised the standard for all other retailers. But a few college graduates wanting to sell short-shorts cannot afford similar engineering resources. The local wine retailer does not have the time to manage a web development team. Even multi-national retailers like Levi's struggle to replicate in-house expertise to develop a similar technology stack. Instead, everyone else uses third-party software vendors to build out their commerce stack. This trend of using third-party software to keep pace with Amazon is what we call the Amazonification of Commerce.

The trend is not completely new and a few companies have become successful “arms-dealers” to the commerce industry. Bazaarvoice, ChannelAdvisor, Demandware, LivePerson, and Shopify are all public, collectively generating over $1B of revenue. What has changed is that retailers historically combined two or three of these solutions with in-house engineering resources. Now, to be competitive, we are seeing merchants piece together dozens of point solutions and specific use-case vendors. The gravitational pull of Amazon is so strong that merchants can no longer afford to deliver an inferior commerce experience. Chances are that Amazon or a number of other merchants sell the same product.

Gartner estimates that the ecommerce application software market is worth ~$4.3B in 2014 and forecasts it to grow by a CAGR of 15% to $7.6B in 2018. We think this is still being conservative, but looking at the growing number of companies in the space, we discovered several insights. 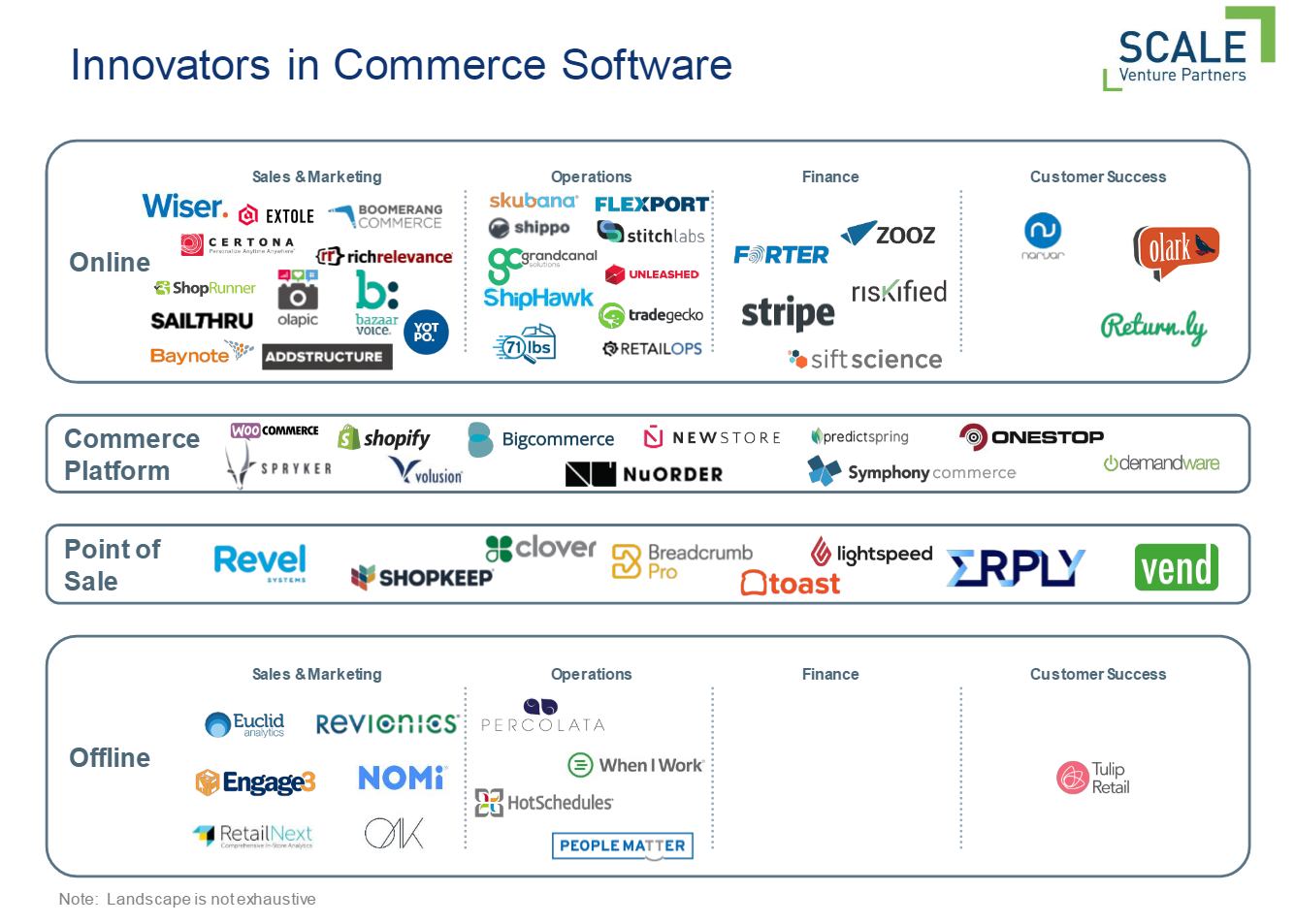 1) Amazon is not just disrupting ecommerce

The disruption of offline commerce including the collapse of big box retailers is well documented. Amazon, with its ecommerce dominance, has been one of the biggest catalysts. A lot of focus has been on price, but offline merchants are now realizing that they can win on experience. We are seeing physical retailers scramble to bring technology into their storefronts. Like in the online world, the vendors providing the innovation ate not the incumbents, but new start-ups. Omniture brought online merchants powerful consumer analytics online. Companies like RetailNext and Euclid are replicating that experience in the physical world.

2) There is a massive opportunity at the core

There are a large number of companies competing to be the core commerce platform online and the point-of-sale system offline. This makes sense as both markets have a significant opportunity as they migrate to the cloud. The size of the opportunity is also significant because all merchants need one of these platforms. At the same time, the product needs vary widely by merchant size creating significant market fragmentation. For reference, online commerce platforms have raised over $450M and the POS vendors have raised over $375M from venture capitalist in recent years.

3) Sales & Marketing is where the most companies are

Gartner has predicted that CMOs will overtake CIOs on IT spend in the near future and retail is no exception. Software designed to enable marketers is by far the category featuring the largest number of innovators. These companies benefit from being able to easily attach to sales acceleration and can therefore more easily justify their return-on-investment. Scale has actively invested in this category both historically (Omniture, ExactTarget) and currently (Sailthru, Extole).

4) Retail is detail; online and offline

A number of companies are innovating in operations as consumer expectations increase. Ecommerce is turning supply chains upside down as merchants manage dozens of channels, shipping options, fulfillment centers, and cross-over with physical retail. While smaller merchants start with spreadsheets, the complexities quickly become such that only a best of breed software vendor can solve these problems. Simultaneously, offline commerce is increasingly feeling pressures to control labor costs and manage customer spikes through scheduling software from vendors like PeopleMatter.

5) Finance is mostly a online opportunity

We have seen very few companies trying to innovate the payments flow for offline commerce. What this really tells us is that it is mostly a solved problem, served by traditional payments providers and merchant acquirers. Online, on the other hand, you have had break away success such as Braintree and Stripe enabling more merchants to accept more payment types easier. Fraud is also increasingly a large problem and cost center, with a slew of innovators such as Forter who is providing a turn-key fraud-prevention-as-a-service solution.

6) Customer success has the most whitespace

Customer success is an emerging category in software-as-a-service and we believe this trend will carry-over to retail. Merchants have an opportunity to engage with their customers not just during the transaction, but also after the transaction to encourage subsequent loyalty. Online is easier because CRM data is gathered during the check-out process, allowing companies like Narvar to optimize the shipment tracking and returns / exchanges experience. However, we think innovators will emerge allowing offline merchants to interact with their past customers as well (companies like Nordstrom’s already do this through heavy, in-house solutions).

Some Thoughts on Annual Planning 2023

2023 Whisper Numbers: Growth Expected to Continue at Around 2022 Levels