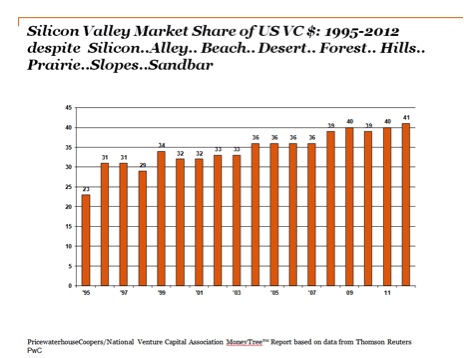 The power curve is stark: Silicon Valley has always had a massively disproportionate share of VC deals.  I spoke on a panel recently to review 2012 financings, which following a 20-year trend were mostly in Silicon Valley.

Today, I met with an entrepreneur who recently returned to the Bay Area after 2 years trying to scale companies in Austin, TX. He moved there looking for a lower cost, family friendly startup zone. Now he and his family are re-ensconced in the Bay Area. From him I got a taste of why the Bay rules in VC. 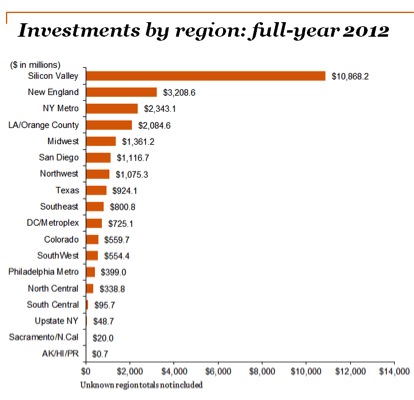 Californians are generally allowed to change jobs in a fluid labor market.  Nationally, it's common to have a "non-compete" clause as part of an employment agreement, restricting employees from joining another company or starting one of their own in a competitive space.  In California, non-competes are not only unenforceable, they're illegal. In other states, they can reduce labor flexibility. Texas in particular generally enforces non-competes, sometimes with limitations. Is Governor Perry going to change that law in his quest to draw high techs to Texas? Harvard Business Review says non-competes cause brain drains.

The founder told me that Austin has a smaller pool of super-talented execs than the larger Silicon Valley, but the bigger problem was that getting someone to leave a job for a startup in an adjacent space was very hard. Incumbents, whether existing employers or investors would threaten a lawsuit and keep people in place. Interestingly, non-competes signed in other states can't be enforced in California, so if someone moves OUT of Texas, they're free and safe.  The other states that are most employee-friendly on non-competes are Louisiana, Alabama, Florida, Oregon and Michigan.

The two largest venture capital regions outside Silicon Valley, New York and Massachusetts have far more restrictive (for employees) non-compete laws. Massachusetts considered changing their laws to enhance job mobility coming out of the recession, but left the proposals un-enacted in 2010. ScaleVP has had great portfolio companies built in a variety of environments: ExactTarget (NYSE: ET) in Indiana, virtually bans non-competes, Omniture (Acqd: ADBE) in Utah allows restrictions on employees and Vitrue (Acqd: ORCL) in Georgia which recently changed to reduce non-competes.  Law firm Beck, Reed, Riden conducted a useful survey of where each state stands on non-competes.

A non-compete isn't the only reason why the abundance of VC $$ remain in Silicon Valley but it is an important item to consider.  In the technology landscape, talent can make or break a business and the more fluid the resources, the better the chance of building a viable business.