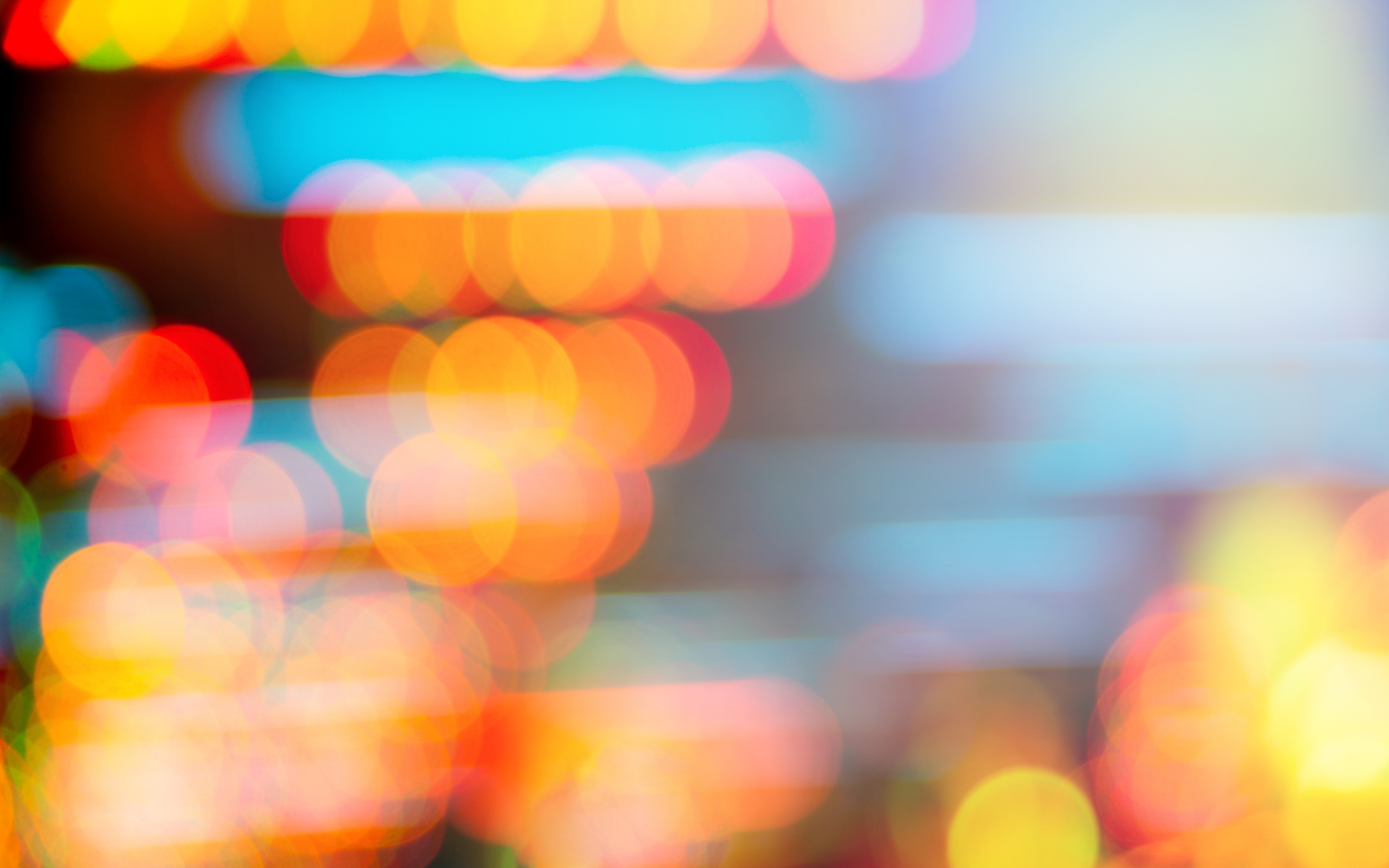 With Q1 now closed, we are getting early numbers from many of our companies. There are three big takeaways:

Be sure to read our thoughts on planning and fundraising during the downturn.

This table shows the distribution of Q1 performance across the Scale portfolio sample set, based on Q1 New ARR as a percentage of the company’s FY20 Board plan. 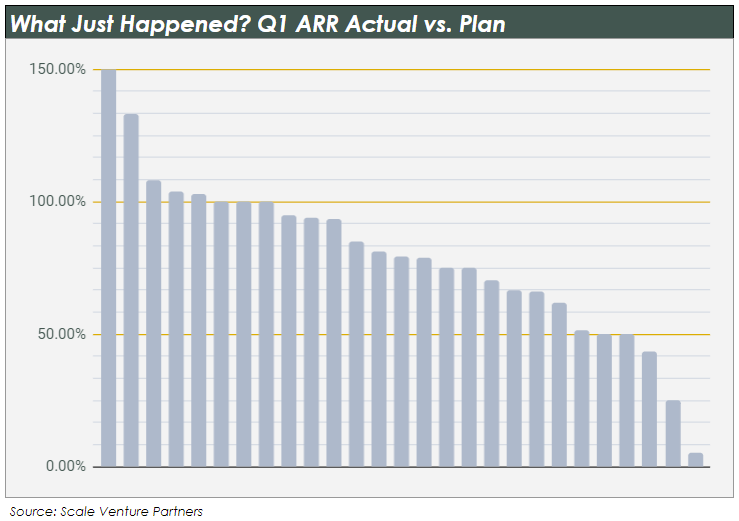 Here is the performance data in aggregate:

The next table gives a year-over-year view, showing Q1 2020 New ARR as a percentage of Q1 2019 New ARR. This is another way to calibrate what is happening in the market. Board plans are future-looking assumptions but last year’s numbers are fact. 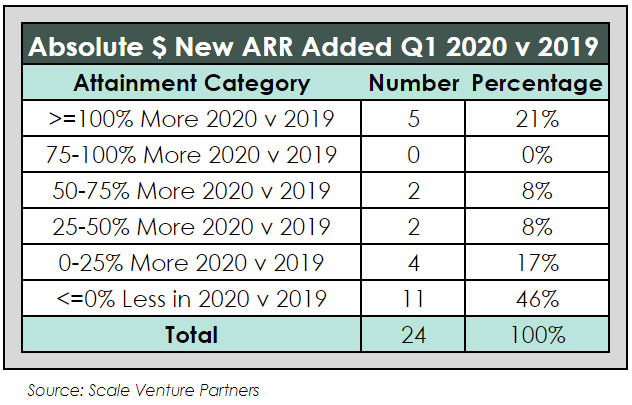 The story here is similar, with some companies continuing to grow quickly but 46% adding less new ARR this year than the same quarter last year. All but one of these companies are still growing in absolute terms but growth rates in this group are declining rapidly.

What Is Happening? Ruthless IT Prioritization

The wide dispersion of outcomes shows there are two forces acting at the same time. The first is an overall downward trend on everything from the shutdown. The second force for some is an upward lift driven by IT prioritization of initiatives in response to the shutdown.

Of the companies in our sample doing more than 100% of plan, most (7) of them are enabling e-commerce or selling cloud-based collaboration and work management tools. Both markets experienced strong demand right down to the March 31 wire.

The e-commerce lift is obvious given the e-commerce surge of WFH orders and the strains on infrastructure. The cloud-based collaboration market extends well beyond the obvious (Zoom, Teams). Instead, now that companies have completely remote workforces, they are recognizing the need to manage workflows (software development, design collaboration, or just plain task management) in a distributed fashion. IT departments are scrambling to support these changes and prioritizing spend accordingly.

The companies at the low end of the attainment scale suffered from one or more of three broad problems. (1) Some were on the losing side of the same IT prioritization referenced above. Teams can only take on so many projects and not-urgent projects are getting axed. (2) Some have products that the shutdown makes impossible to sell or, more often, install or use. Finally, (3) there’s the plain reality that the macro shutdown came with indiscriminate spending freezes across the board. Even after this shutdown ends, we believe that the IT priorities being set right now will be here for years to come.

Most of the CEOs in our portfolio sample seemed more worried about Q2 on April 1st than they had been a week earlier. Their color commentary tells the story:

“A week from the end of the quarter we were confident we would make the number. It fell away in the last three days.”

“We went from our best quarter (Q4 2019) to our worst, 50% of plan. We ended up not doing an end-of-quarter push -- customers were just not going to sign deals, and we decided to protect relationships. [We needed to revise forecasts downward several times as the quarter wrapped up.] This weighs on my mind as I think about Q2 and beyond.”

One company that made their number stated: “Big positive swings [came from strength in COVID-driven product sales] which helped backfill some COVID softening we saw on other opportunities.”

“I think Q2 will be tough as work from home gradually kills projects. One of my reps reported that a prospect told him, ‘Look, I am stuck homeschooling three kids, I don’t have the bandwidth for taking on any new software initiatives.’ I think productivity will go to s*t as time goes on.”

This last quote has the horrible ring of truth, capturing many of the dynamics in play right now in a single observation.

I am a huge fan of Philip Tetlock’s approach to forecasting, which is to make an initial estimate and then continually adjust the estimate based on each new piece of data.

The Q1 actual results were a little better than we had expected with our original forecast. But we are still waiting for eight companies that have an April 30th quarter end, at which point my guess is that our estimate of an overall 25% Q1 decline will be correct. Here’s what we’re assuming right now for Q2 and beyond: 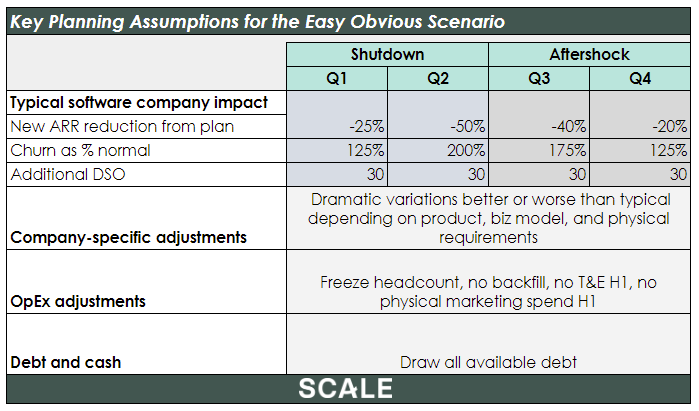 Fear, uncertainty, and doubt about Q2 seems higher than before the quarter ended. But we are all on an emotional roller coaster right now, and I want to try and disentangle emotions from known fact. Prior to meaningful new data for Q2, our current Q2 estimate (New ARR down 50% from plan, 2x normal churn, 30 additional days DSO) is as good a base scenario as any right now. Always remember to run sensitivities to see which of these variables matter most to your business given the extent of the uncertainty.

Jeremy Kaufmann contributed to this article.