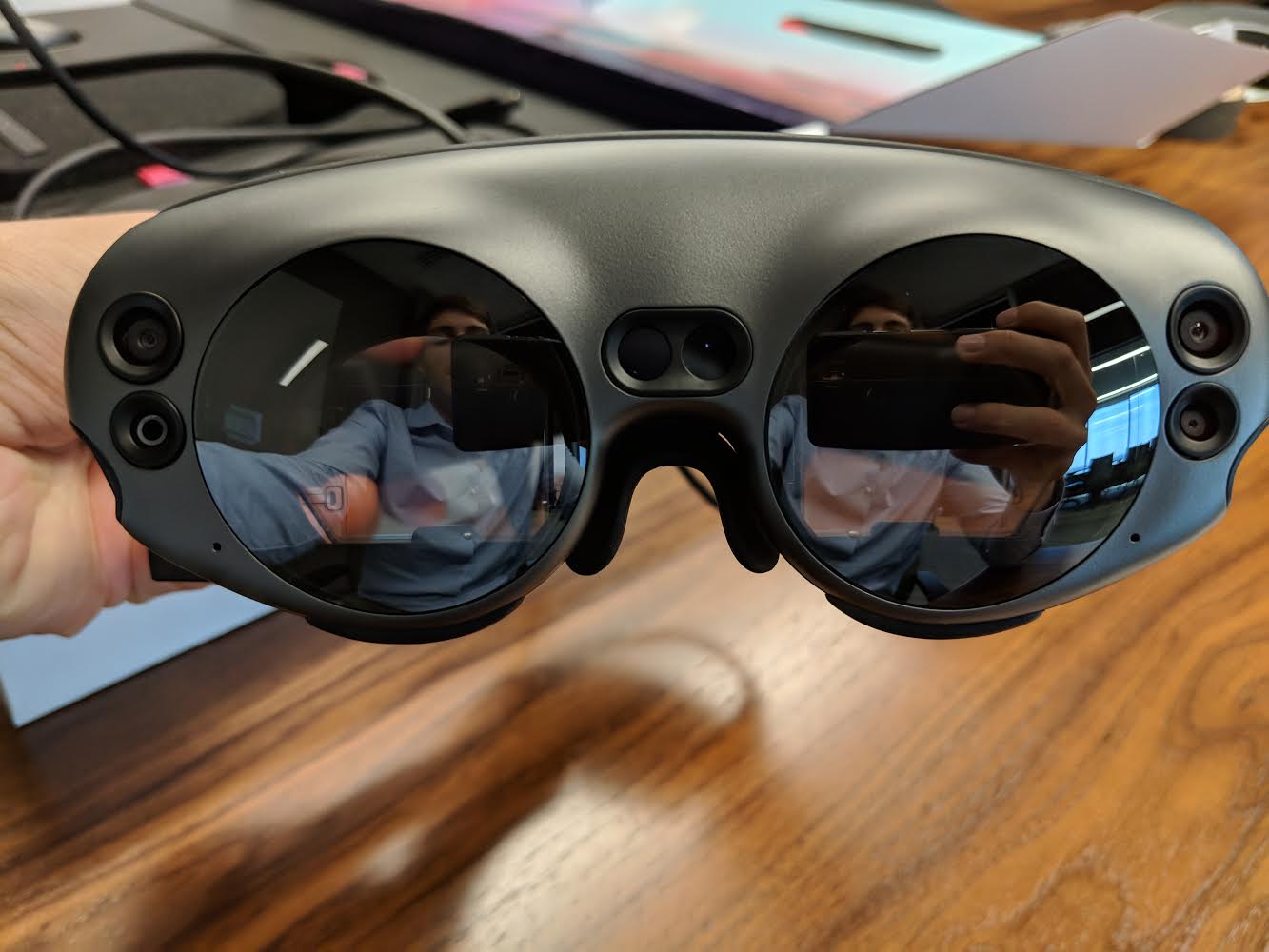 Magic Leap One: Worth the Hype?

Magic Leap, the company promising unparalleled Mixed Reality hardware and software, unveiled its Magic Leap One Creator edition earlier this month. I had registered as a Magic Leap developer a few months ago and have been excited to test it out. So, is it worth all the hype? I spent the afternoon running it through its paces, from delivery to design to experience. In short, it is the best mixed reality experience available and it made me a believer in the the reality of an augmented future, this will certainly change EVERYTHING. But, as it stands today, it’s certainly not worth $2k with the current set of apps and capability and there remains to be plenty of work to be done across the ecosystem to improve the experience. Here is more on my initial interactions with Magic Leap One: 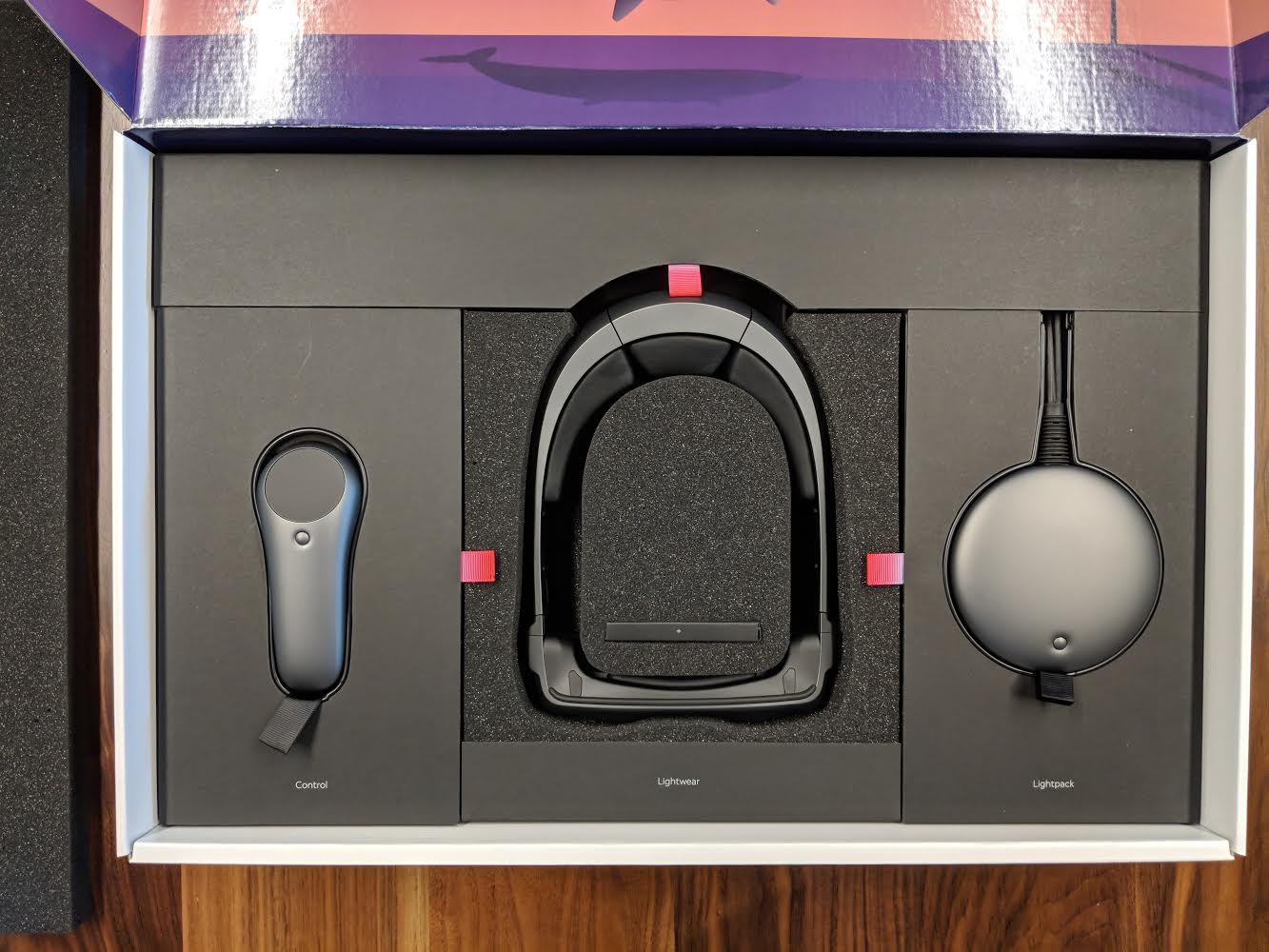 Magic Leap is delivering Magic Leap One, Creator Edition, with an almost literal white glove. A representative from Enjoy brought my device and spent an hour setting me up. While he wasn’t wearing white gloves he certainly knew his stuff. After picking my device size (there are two to choose from and the the Magic Leap mobile app tells you which will fit you) we opened it up. The colorful graphic on the underside of the box brought back memories of the company’s early teaser images and framed an impressive display of gear.

Setup was lengthy, perhaps that is why someone is sent to help you. Between all of the sizing accessories, five nose bridge and two forehead, and the un-intuitive angle at which the One sits on your head, there is a lot to get right on fit. However, aside from all the steps and fit, the set up was fairly intuitive and easy. The in-headset onboarding experience walks you through it all and does so in mixed reality, so I was I was mesmerized the whole time. However, all this setup means that the device is intended for a single user, like a smartphone, rather than sharing frequently between users. It will be interesting to see how this evolves in the long run and for VR headsets in general. They remain somewhat in limbo - are they a personal device? or will they act more like a gaming console? For the price and frequency of use, I don’t see a household buying 4-5 of these so being able to adjust the headset easily should be a consideration.

Before describing the visual experience, it’s worth reiterating that this was not prototype or a typical v1 hardware. The level of industrial design is through the roof with lots of attention to detail. My favorite design elements, which you don’t see in many of the photos, are the indicator lights on both the controller and the battery/computer pack. They are hidden until they spin a rainbow of color during boot up.

The headset, with a surprisingly dense sensor array, looks like an autonomous car engineer retrofitted a pair of Snap Spectacles. There are sensors everywhere! Yet, it was reasonably light and fairly comfortable. The gear felt solid and the headset size adjuster is slick. I wore it for an hour, no problem.

The experience had its ups and downs, but certainly looked real enough. The image resolution is limited, but I didn’t notice when I was engaging with the apps.  What I did notice f was the limited field of view. While I can see quite a bit through the glasses, only about a quarter of my field of view was illuminated by the virtual scene and often I would have to step back in order to make sense of objects partially in view. With the added speakers near your ears, the experience is fairly immersive.

My ability to interact with the environment was more than I expected but lacked the interactivity to make it truly impressive. I assumed I could only use the controller, but found some of the graphics would respond to my hand, but only my hands and not all that well. Knowing how to navigate the menus and environment was inconsistent, sometimes you navigate the trackpad, sometimes you just point your headset, others you point the controller. Pointing the controller was more precise than I expected and really easy. I’d like to see more of that. Also, a keyboard or voice input would be amazing. As typing on the One is painful, reminiscent of the TV with the remote.

It is interesting to think about this experience relative to Virtual Reality. I expected, or at least wanted, others in the room to see what I saw. A phenomenon I don’t remember from VR where one is insulated from the outside world. I’m told that there may be a way to do so with multiple devices (if you have one, call me up and we’ll give it a try).

OK, so what does it actually do? It comes with several demos and while they are decent for a developer edition, currently there aren’t any applications worth extended use. Beware, you will get lost in the menus, they are as consistent as the tools to navigate them. 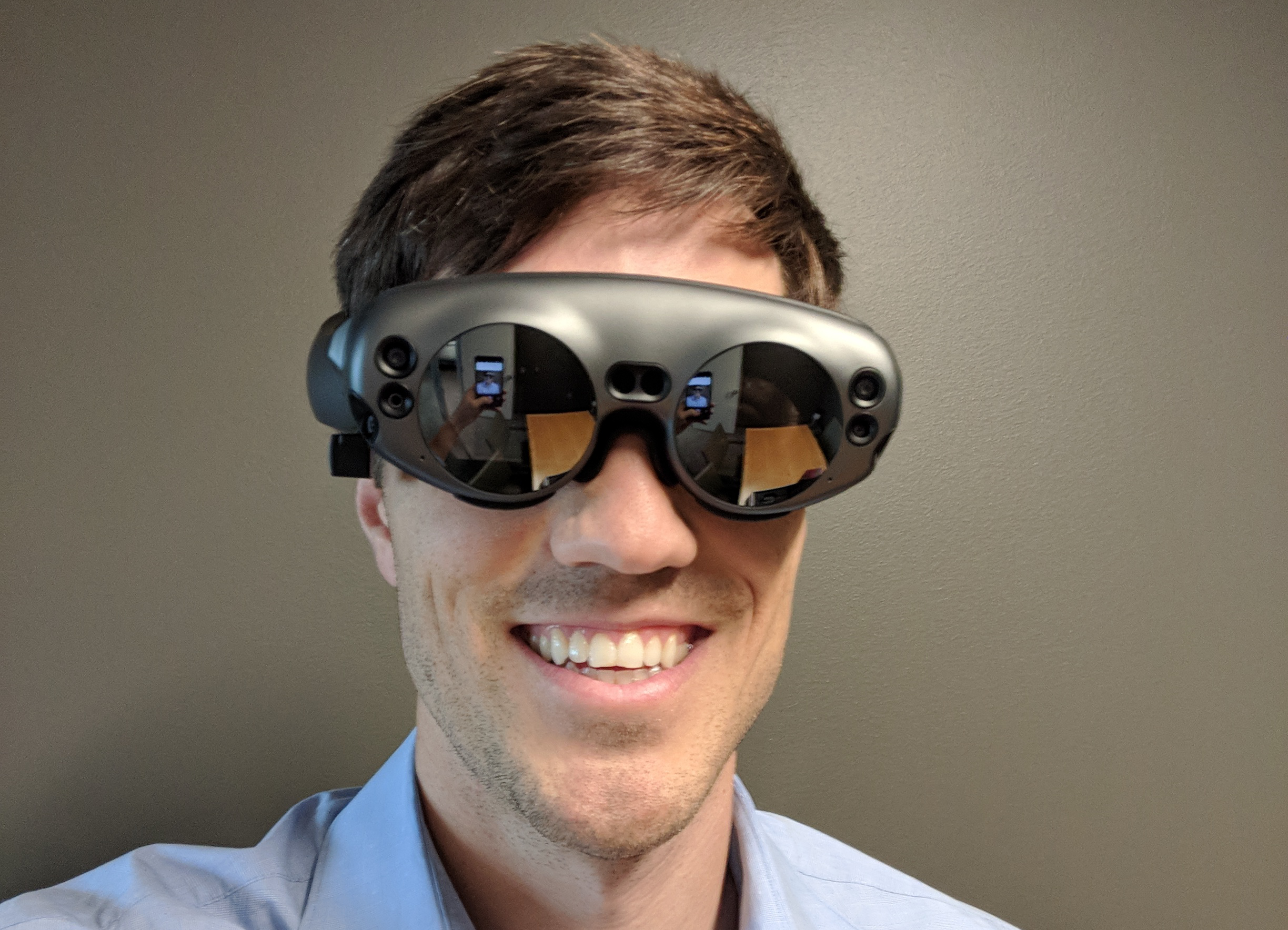 After trying them all, I found myself thinking about what should be in this list. The raw gaming and entertainment power of this device is certainly under-developed with the current demos. I especially think multiplayer, shared room games could be powerful. Consumer and general enterprise productivity is a little harder to imagine without significant reduction in cost, size and strangeness. On the other hand, specialist professional use cases, like those that Microsoft has marketed the HoloLens around, are very intriguing and a market I’ll keep my eye on.

This is the latest and greatest in mixed or augmented reality, but as expected with a developer edition, not ready for real use yet. This is certainly evident in the inconsistency of menus, apps and interfaces that I imagine may have all arrived from partners just before shipping and will be cleaned up before a broader release. Fortunately, the hardware looks ready for primetime, aside from the narrow field of view. Now, time for me to roll up the proverbial sleeve and get to work on a mixed reality experience of my own. If you are doing the same, I’d love to hear about it.