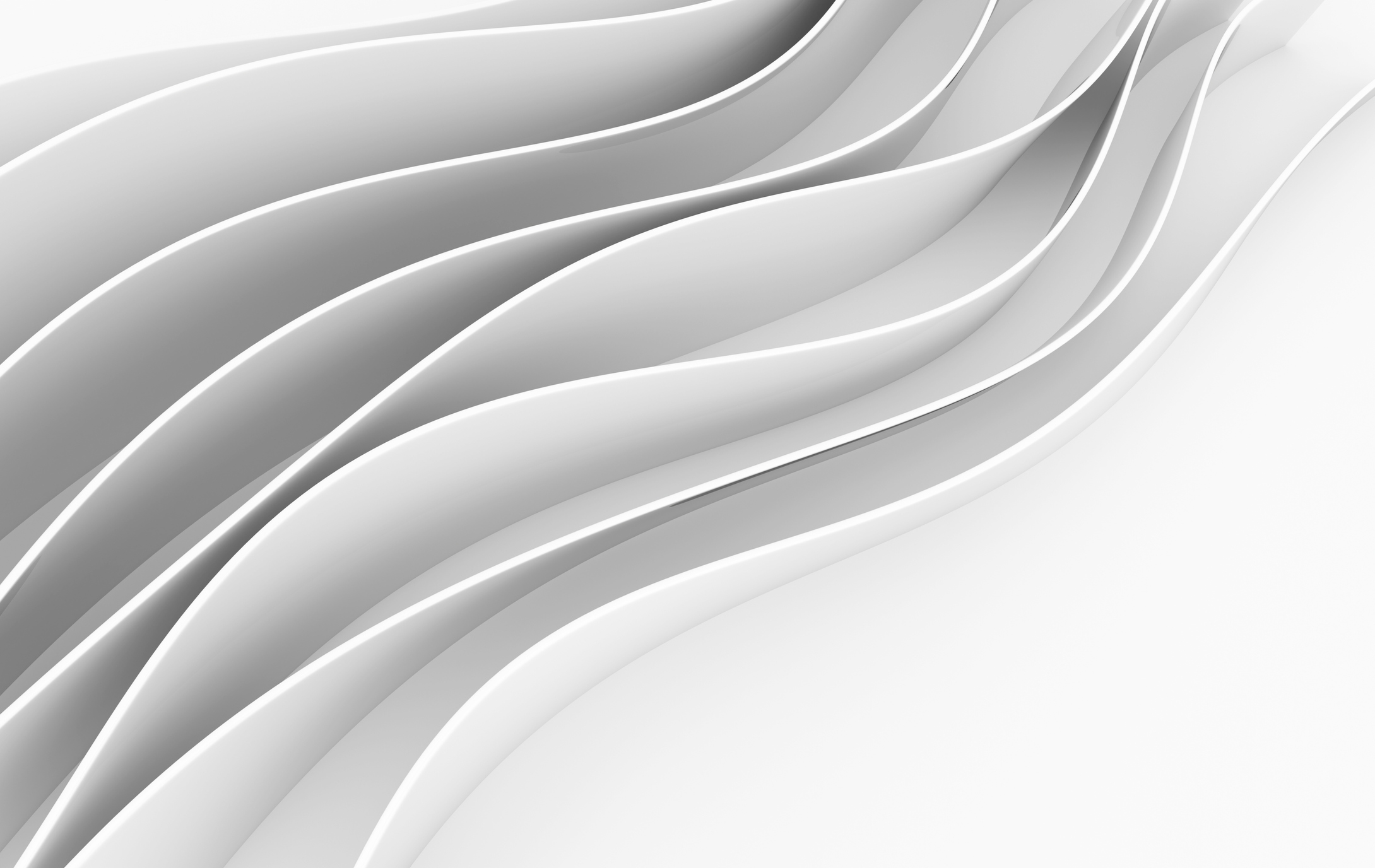 For even the most focused leaders within early-stage startups, it’s hard to ignore SaaS valuations in the public market. This article is a reminder that building a company with solid fundamentals is the most reliable way to reach IPO viability. As we’ll see in the data below, so many startups are choosing to rush past go-to-market fundamentals that they’re actually impacting the long-term efficiency trends as measured by the Magic Number.

As of late, it has been hard to ignore investor excitement for SaaS in the public markets. We’ve officially entered an era where valuations have reached an all-time high, and despite trepidation among certain investors, multiples have continued to climb. Some seem to think we’ve officially achieved a new level of silliness. “Get out while you can! Make money now!” From every anecdote I’ve ever heard or read about the DotCom bubble, what we’re going through right now seems to have a similar ring.

But this isn’t completely unfounded. The last decade of private market SaaS investing -- principally driven by venture capital -- is generating returns that haven’t been seen in many years. According to Cambridge Associates, the median internal rate of return across U.S. venture capital has been higher than in any other U.S.-based public market index over the past 10 years. Money is coming back and institutional investors are cashing checks driven by wins in their venture portfolios. While other segments of the economy are facing a long road to recovery, businesses delivering SaaS and cloud-based solutions are providing the connective tissue that is holding the economy together and moving forward during a time of great uncertainty. The world is becoming digitized, and the cloud has been the driving force.

Venture returns as of late have been stellar, driven by liquidity in public markets that are valuing SaaS and cloud stocks at revenue multiples more than three times the long-term median of 5x. In the world of software, investors underwrite growth, and even if they have to squint, are willing to look way into the future to find it. We’ve arguably entered an era where the growth prospects for SaaS and cloud are better positioned (vs. other market segments) than they have ever been, as the business world quickly tilts towards a remote-first orientation. Some investors are more thesis-driven than others, but when the smell of money is impossible to ignore, others take note. Investors from all corners of the financial ecosystem are racing to pile on, and U.S.-based venture managers are now sitting on a record amount of dry powder, with firms from Boston to Silicon Valley eagerly searching to fund the next unicorn.

And the opportunity set is seemingly boundless. The number of SaaS and cloud startups receiving first rounds of funding within the last half decade is also at a historical high. Barriers to entry have never been lower, with hosting and other cloud computing costs having plummeted in recent years. And on the application side, there is no shortage of DIY solutions (see my teammate Chris Yin’s recent overview of low-code / no-code) that allow founders to break into the market. Needless to say, starting up a new business in the land of SaaS has never been easier or cheaper.

Watch Out for the Magic Number Chain Reaction

But despite the wide-spread exuberance, the confluence of all the dynamics above has created the perfect setup for sloppy go-to-market efficiency - in what I like to call, “the Magic Number chain reaction.” On one side, there is a market white hot for public SaaS, lots of recent liquidly that has been driving strong historical venture returns, and billions of dollars in dry powder that has recently flown back into the ecosystem, ready to be invested. On the other side, there are more SaaS and cloud businesses coming into the market than ever before, driven by low barriers to entry, dirt cheap cloud computing costs, and so many low-code / no-code applications to get started that it makes your head start to hurt.

At Scale, we’ve often measured go-to-market efficiency using the Magic Number, which is a proxy for the amount of first-year revenue a SaaS business is able to generate compared to the equivalent dollars invested behind it. The long-term median Magic Number across our database is 0.7x, which is to say that a SaaS company at scale will typically spend $1.00 to drive $0.70 in first year revenue, recouping its customer acquisition cost somewhere in the second year.

But take a quick look at the chart below, which we first published in our History of the Magic Number: 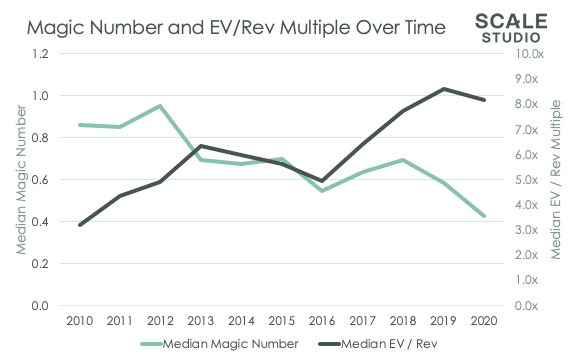 There is a very strong negative correlation between public market valuations and overall go-to-market efficiency (Magic Number). With a few blips (the most recent February - April was pronounced, but very short lived), SaaS has been on a decade-plus bull market run.

This dynamic is the byproduct of two factors: competition and speed. In SaaS today, there is no time to waste. Competition has never been stiffer. There are more early-stage SaaS and cloud businesses in the ring grinding it out to achieve unicorn stardom -- and no shortage of venture investors to fund them. For founders, this pursuit becomes a race against time. “Found product-market fit? It’s go-time!” Double down on your pursuit of relentless growth. Management reacts by starting to scale, recruiting marketing, sales, and business development leaders to take aim at all corners of the market. And investors encourage it. If there were once one or two other hungry SaaS wolves on your trail, there are now multiples of that. “These kinds of valuations won’t last forever, so there is no time to waste.” The expectations have now been set for Chia Pet-esque ARR growth. The success in a market like this is perhaps worth more than it has ever been, but so too is the pressure set by the valuations that private investors have recently needed to pay. Get the money, spend it on growth, beat the competition before they have a chance to use the same playbook against you.

What’s a Founder to Do?

But just because hot public SaaS markets can lead to poor sales efficiency in the private markets doesn’t mean that it should. Building and refining go-to-market operations is something core to what we do at Scale, and it doesn’t have to (and shouldn’t) be a zero-sum game. Scaling should be done carefully and methodically. Management should be seeing meaningful signals of repeatability and should have a clear understanding of where to find customers, how to sell to them, and (hopefully) how to retain them prior to pouring crazy amounts of capital into their go-to-market channels.

In a world of cheap money and fierce competition, scaling as quickly as possible might seem like the right thing to do. But doing so without the right fundamentals in place can be a very difficult and expensive problem to reverse. Not just in terms of dollars, but in the amount of time it will take you to rebuild. This is especially true in the enterprise segment with long rep ramp times and lengthy sales cycles -- and there can be a long-delayed onset before you’re aware that it might have been better to wait.

For every SaaS company, there is a right time to scale go-to-market activity. Don’t let the public markets (or anything else) cloud your judgment on when your company is ready.