The Next Ten Years in SaaS

By Rory O'Driscoll
Trends
Share Now
The SaaS business has now hit early middle age and the best way to think about it is to compare it to the client server revolution...

The SaaS business has now hit early middle age and the best way to think about it is to compare it to the client server revolution in the 1993/1994 time period. At that point the model was well understood, the dominant winners were clear and the next five years were about filling in the open spaces. 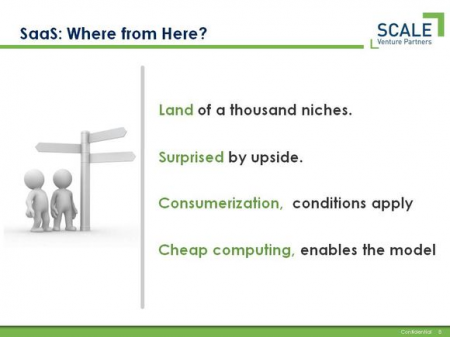 A phrase that stuck in my mind from a 1994 software report, was the description of the business software market as a "land of a thousand niches". It is a helpful way to understand what is happening now.

Business software, unlike either the consumer internet business, or the technology infrastructure business, is not a monolithic market, but instead is a series of separate vertical and horizontal opportunities. This makes sense because business software automates business practices and a bank's business practices are very different from those of a manufacturing company. What a HR department needs to automate (payroll, performance reviews) is different than the automation needs of a marketing department. Contrast this with the technology infrastructure market, where the operating system or networking requirements of the bank, the manufacturing company, the HR department and the marketing department are all the same. Everyone buys basic technology from Cisco and Microsoft, but they all purchase different business applications from different vendors.

As a result there will be many medium sized, ie $1.0 Bn plus, SaaS technology companies built over the next five years to satisfy these various needs. It is unlikely that any of them will ever catch up to Salesforce, who will be the Oracle or SAP of this generation of business technology. However I continue to be surprised at the breath and upside in both verticals and in horizontal markets other than CRM. A great example to me of a vertical is that has massively exceeded what I would have guessed as its potential is Real Pages. The company focuses on automating the process of managing residential apartment buildings. My gut would have been "niche vertical, not that interesting" . Turns out I was wrong. Real Pages has a $1.8Bn market capitalization and $200 MM in trailing revenue! I believe this is indicative of what will be a multi-year wave of SaaS based application software companies in specific verticals or functional areas, generating $1Bn valuations.

In the category of overhyped but still real, is the discussion around the consumerization of IT. The idea is that expectations of what business applications should look like and how they should work, are being driven by how consumer applications like Facebook work. I think this is a real trend, but on its own, it would not be a game changer. Just because business workers want great intuitive software, does not necessarily mean they will get it. For example, take a look at the software that most airline employees still use, to run the flyer check-in process. Masked on the web for the consumer, it is truly dreadful and arcane for the average airline check in employee. The reality is that if "the man" can jam mediocre software down the throat of employees he will, because mediocrity is usually easier to implement, even in saas. However if the desire for a better work based software experience goes along with the ability for individual employees to actually go out and get that software directly, then the voice of the business consumer can be heard. This is most likely to happen if the business process being automated is personal to a single employee or a small group and does not required full corporate buy in.

Early on this was true for Salesforce, now it is true for products like Box.net (disclosure we are an investor), where an individual can adopt Box for free, and a small group can roll it out for a relatively trivial amount, before ultimately you get the enterprise adoption that allows the vendor to make real money. There are four entwined threads within the above, fairly simple example, that need to be understood separately.

First, there has to be value in automating the business process at the individual level so that individuals or small groups will want to adopt the product, even if the company as a whole has not adopted it. (Yes to Box, Yammer, Docusign and simple CRM, no for the payroll system).

Third there has to be an upsell model that allows the vendor to make money by charging more based on usage (10 Gig for $ 4.99) or enterprise wide features ( "admin rights for $ 20 per user" ). If this is lacking the vendor ultimately runs out of cash despite delighting users with free software.

If these three conditions hold true, then that next generation SaaS model, built on freemium users and a clear upsell model can apply. If not, the more traditional SaaS selling model that worked just fine for companies like SuccessFactors and Athena Health, is the way to go. We will happily finance both.

Finally the key enabler of all this is the advent, via the cloud, of "dirt cheap computing" . A business model based on giving away a service to users with the expectation that as few as 3% of users will become paying customers, has to be accompanied by a cost structure that allows that math to work. Ubiquitous, cheap cloud based computing, accessible to anyone with basic IT skills via Amazon or the PaaS vendors, is the key enabling technology of the next generation of SaaS vendors. I would argue (and may do so in a subsequent post) that it is in fact the key technology trend of the next ten years, across all markets. Cheap computing will be like cheap energy in the early 20th century, the key enabler of growth for the entire economy.

As investors we continue to be excited about the Saas opportunity. We believe that alignment it enforces between software vendors and their customers makes for better software, happier customers and ultimately better investments. The money from the great Marc Benioff "aha moment" of No Software has been made, but there are still markets and models that will allow for billion dollar outcomes. If you have an opportunity you think is right for us, feel free to email me.

Customer Retention Lessons From Early Movers in Other Industries

Morale Matters: Some Do’s and Don’ts of Cost Cutting

Admitting Ignorance: Planning in the Time of COVID