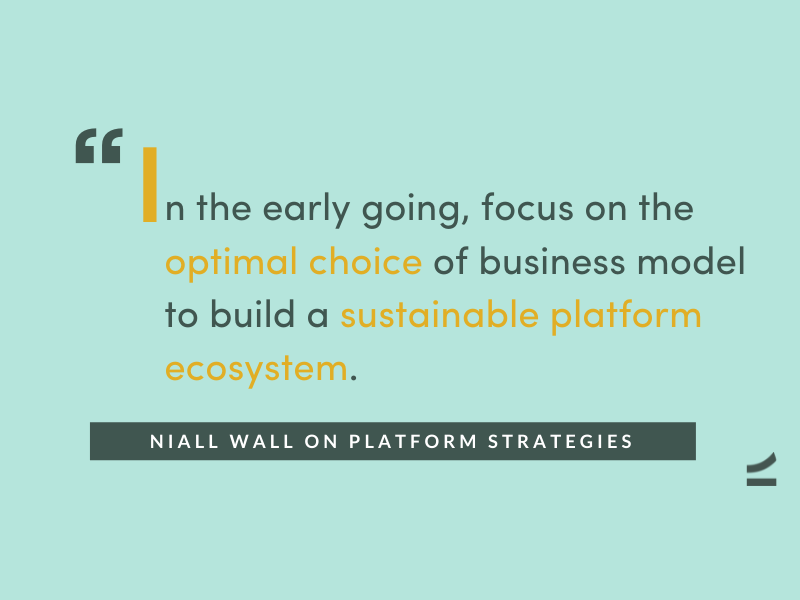 By Niall Wall
Trends
Share Now
Former head of platform at Box and Workday on the business model and monetization decisions for success with your platform strategy.

Niall Wall is a veteran of Box’s hyper-growth phase, where he built and led the Business Development, Corporate Development, Channels, International, and Platform businesses responsible for 40% of company revenue. He then went on to lead the Global Partners, Channels, and Business Development organizations at Workday. These days he advises early-stage founders on go-to-market as part of Scale’s Executive Network.

This article is about the business models available to startups that want to build healthy platform ecosystems. Long-term success in this area begins with the mix of business model and monetization decisions. From my direct experience at Box and Workday and from dozens of conversations with software companies investing in platform businesses, I’ve concluded there are three broad categories of platform business models.

Understanding at the outset which one you should pursue is one of the most important strategy decisions you as a founder will make.

There’s no one-size-fits all approach to platforms. But as we’ll see below, only two of them actually work over the long term.

The Why and How of Platform Ecosystems

What do we mean by a platform? At its core, many companies build a first-party solution, either as an app or an API that serves specific end-customer needs, then license capabilities to third-party developers to extend functionality of that first-party solution. This makes the first-party app more valuable to end customers, which attracts more developers to build more functionality and…Voilà, you have a flywheel that creates significant value over time. Slack, Stripe, and Snowflake are all great examples of platform companies with self-sustaining flywheels and massive valuation outcomes.

While it may be obvious, companies should pursue a platform strategy because:

Given the winner-take-all advantages of platform businesses, there are many key decisions, from product strategy, API investments, Dev Rel, and Platform Marketing investments needed. Every one of these is worth an in-depth discussion. But in the early going, it’s important to focus on the optimal choice of business model to build a sustainable platform ecosystem. Different types of platform ecosystems are best built using specific monetization strategies.

Successful platforms have a clear alignment of incentives between the platform company, the third-party developers relying on its API, and end users. There are different ways to achieve this alignment, so platforms come in different flavors based primarily on business model decisions about monetization of the ecosystem.

This alignment does not happen automatically. In fact, there are very large, successful software companies generating revenue from their platform ecosystems despite what I consider misalignment (see the Misaligned Marketplace Trap below). I’m arguing that long-term success is best accomplished by pursuing either of the two platform models where incentives throughout the ecosystems are properly aligned.

This type of first-party-only platform is centered on a killer first-party app that the platform company makes easy to integrate into third-party apps. However, the company – by choice or by friction – does not monetize the platform activity as a separate business.

A key early product decision for this type of platform is building core APIs and leveraging those APIs within the first-party app. This tends to mean:

It’s important here to have absolute clarity on long-term product strategy, especially on whether to allow competitors to build first-party apps on your platform even if these would compete directly with you (as with Salesforce and Veeva).

To give an example, while I was at Box we enabled over 1,600 apps to embed Box content into third-party apps via the Box API, for use cases like sharing secure HIPAA-compliant medical content or financial services apps that shared sensitive financial documents. Internally, we had many vigorous debates as to whether to monetize the APIs that powered these highly valuable use cases. Ultimately we erred on the side of a free marketplace, and helped third-party app builders leverage Box APIs and promote those solutions to Box customers, which drove higher adoption and stickiness of Box within our enterprise customers.

The secret was ensuring we found a mutually aligned GTM motion whereby our monetization came from end customers only while consumption was driven by third-party app builders on our platform. We purposefully didn’t charge the app builders for access to customers via the Box marketplace, but instead monitored and charged for API consumption and integrations in premium Box pricing plans.

The biggest pitfall in an open marketplace is getting greedy and looking to take a cut of app builder revenue, which runs counter to the end goal of a killer first-party app that is enhanced by a synergistic ecosystem.

It is also extremely difficult to build the metering, licensing, app certification, and runtime environments to monetize third-party app activity. In fact, doing so can create a “marketplace trap”.

This type of hybrid platform looks like the Free Marketplace above, but with a critical difference: the platform company takes a cut from third-party developer sales via its marketplace. This model dis-incentivizes the third-party developers (revenue loss) and the end users (higher prices). The model often fails over the long term because it stifles the growth of a healthy platform ecosystem because its incentives are misaligned.

It is a massive investment to not only harden APIs to enable builders on your platform, even as the back-end processes to meter/charge for it are not necessarily accretive to end customer value. Factors like runtime, distribution, and licensing add further complexity.

You also may need to invest heavily in your marketplace to promote these apps and build related processes like curating and certifying third-party apps.

Typically we see both the end customer paying for the first-party app as well as third-party developers paying for the right to access APIs; the latter is monetized either through Percent of Net Revenue (PNR) or consumption (e.g. number of API calls, network throughput, etc).

Here the platform company monetizes its platform ecosystem by charging app builders to sell on its platform. I saw this at Box, where Salesforce took a healthy cut of Box ARR even though there was minimal value to Box customers for the consumption of Salesforce APIs. It gave Box a disincentive to promote the utility of the Box for Salesforce solution at scale.

While companies like Salesforce, ServiceNow, and Atlassian are powerhouses, and nobody would argue they have not been effective in building successful platform businesses, there is a definite trend away from this “taxation model” today, as evidenced by Atlassian’s recent decision to significantly reduce their take rate for cloud apps built on Forge: today 95% of the value goes to the builder.

Shopify, Google Marketplace, and others appear to be going in a similar direction by significantly reducing the percentage fees charged to builders on their platforms, and instead monetizing their first-party apps.

This is where the importance of a mutually-aligned business model is so clear. Platforms in this category like Salesforce and ServiceNow are charging app builders a fee or “tax” to access data from the System of Record – which is misaligned with the app builder business and thus monetization does not happen to the end customer.

Absolutely try to avoid this misalignment if at all possible. It’s a dead end. The future is elsewhere.

This is the “cleanest” platform model because you start out as a platform and a platform is what you sell. This could mean you are in the business of creating an API with clear value for third-party app builders to build on top of, and you monetize only when your API is consumed. It could also mean you start out building a first-party app but start with a consumption model.

Twilio, Stripe, Snowflake, Plaid, most of the Hyperscalers

Find an API (e.g. payments or SMS messaging) that has profound value if embeddable into other apps. Make this API highly performant, secure, easy to consume, with extensibility as well as backward compatibility.

Here, too, we see the perfect manifestation of a mutually-aligned business model: you enable third-party app builders to leverage your APIs, end customers pay the third-parties for those derivative apps, and you monetize based upon mutual end-customer consumption. This business model is almost always consumption based.

These companies will likely invest heavily in building a marketplace that makes it easy for end users to discover and buy third-party apps.

The Snowflake App Marketplace is a great example. It shows the company is consciously choosing to not monetize the marketplace in favor of the long-term benefits that come from highly-motivated app builders who have clear incentives to build for the platform. Snowflake monetizes via a usage-based, per-second pricing model. Apps built on the Snowflake platform drive compute and storage which end customers pay for, which creates this mutually aligned GTM motion and ultimately a platform flywheel.

Issues to think through include:

Starting Down the Right Path to Platform

There is no one-size-fits-all approach to becoming a platform. But there are a few first decisions that any platform aspirant will need to make:

Thinking backward from where you want to be at terminal velocity is a great way to ensure that your platform strategy and business model are aligned and powered by complementary incentives between your company, your users, and your third-party app builders.

Clarity about what options are available to you from the get go puts you on the path to platform success – and the premium valuation that comes with it.