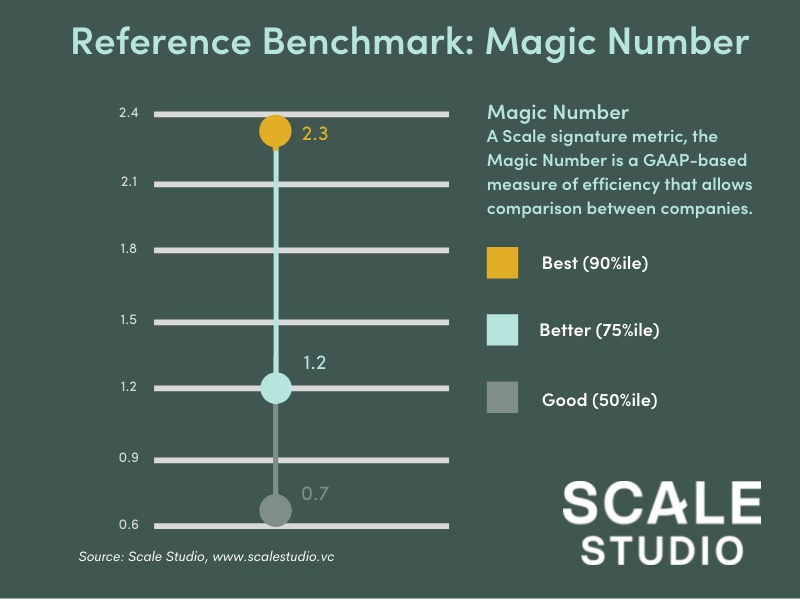 By Dale Chang
Metrics
Share Now
The relationship between money spent on Sales and Marketing and revenue generated from it is captured by the Magic Number. Good/Better/Best data on Magic Number performance.

We recommend that early-growth companies use the Magic Number as their primary sales efficiency metric. Because it’s GAAP-based, it’s easy to track and allows for benchmarking comparisons between companies -- so you can compare how you’re doing relative to the competition.

What is a “good” Magic Number? In our Scale Studio dataset of more than 1,000 enterprise SaaS companies (from $0 to $100M+ in ARR), the long-term median Magic Number is 0.7. It moves higher and lower during short time periods, but over the long haul returns to that 0.7 level. It’s, well, magic.

A Magic Number of 0.7 means that Sales & Marketing delivers $0.70 in recurring revenue for every dollar invested in those operations. SaaS may not be a perpetual motion machine, but that’s a solid ROI.

And of course 0.7 is a good reference point to keep in mind when you’re tracking your startup’s sales efficiency. As long as you’re measuring the GAAP-based Magic Number, you can always compare your most recent results to the 0.7 long-term median or the various Magic Number levels by performance tiers.

As with all SaaS metrics, it’s helpful to read about the nuance with Magic Number (or its ARR-based cousin Net Sales Efficiency), which we’ve packaged in the following series: